Interview with Malte from NECROS CHRISTOS and SIJJIN / DEPICTED #1

Oh wow, they are even selling their own ketchup now“, I thought while I was staring at the menu of Curry 36, the famous hotdog stand on Mehringdamm in Berlin-Kreuzberg. These are historic grounds in the world of heavy metal, since just a few steps away there used to be a recording studio that created the German heavy metal classics of the ‘80s for the bands of Noise Records, such as KREATOR, SODOM, and CELTIC FROST. I did not have much time to contemplate this location, because Malte showed up quickly and we trolled away and started shooting in the area of the Landwehrkanal around Möckernbrücke Station and at the cemetery at Mehringdamm. Afterwards we sat down at a cosy café near Bergmannstraße, and I turned on the voice recorder.

The era of NECROS CHRISTOS is coming to an end. You released the last album and now you are playing the last concerts. Have you already reflected on a personal conclusion to this project? What were your highlights and what were the low points of this journey?
Actually both aspects were interesting. We started out very small, and we recorded demos in the old style and distributed them on tape. It was totally thrilling to see how this grew over the years. In the end we became quite a big thing for this kind of music and played the bigger festivals. The downside also comes quickly, when you suddenly need a tax number and have to deal with this kind of stuff. These are the things that I will NOT miss. I don’t know to what extent it is possible, but with the new project [SIJJIN] I’ll try to shorten the whole business aspect as much as possible. This whole dealing with fees and other business procedures – it does annoy me. Especially when you play bigger events. But the whole journey we made with Necros Christos was totally exciting. We played a lot of good shows and never “overplayed“ ourselves. We always were a band that played very selected shows. These few tours that we did were selected by us, and they were all great.
There are a few things that I would‘ve liked to have done, like a US tour, but this was not meant to be. Next year we‘ll play three concerts in Mexico and this is for sure going to be very cool. For a band from Berlin, we were quite international. Also we’re a multi-national band. Our drummer is Basque; the bassist is from Poland, and the others also have their roots. So we got around quite a bit. This was very nice. Also I’m not sad that next year it’ll be over. We will play our last show at the Chaos Descends festival, and it’s good that way. I’m not, or not yet, sad. 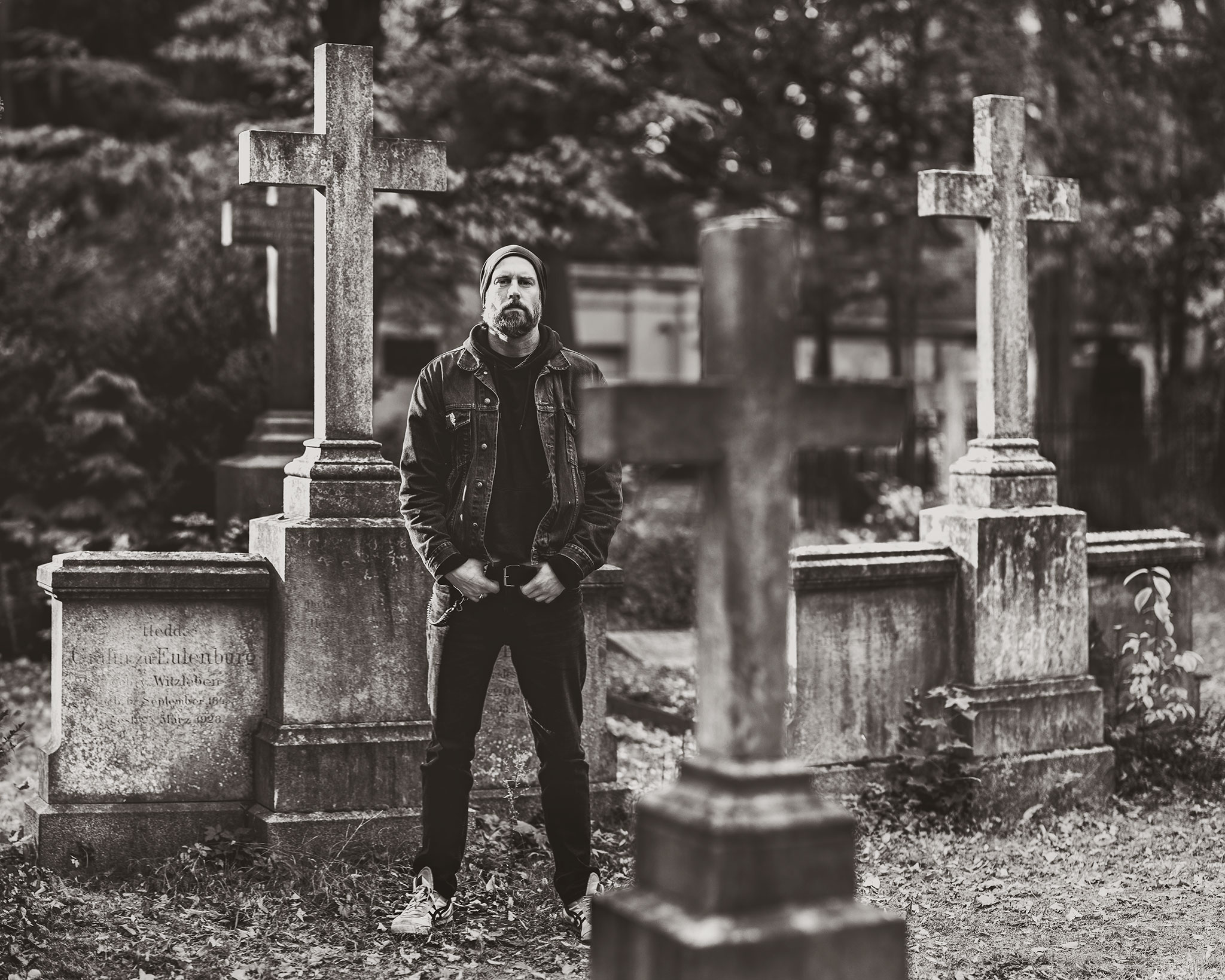 That’s what I wanted to ask: Are there moments when you have doubts if it was the right decision to set an end date for the band?
No, I truly believe that it’s good that way. I still like to play the old songs, but at some point it’s enough. You know, there are so many negative examples of old bands, where you think that you don’t really want to see them anymore. This doesn’t need to happen to us. Of course we’re not on the same level as these other bands, but still. And there’ll be no reunion.

Ok, if not for the money, but what if there is a big demand from the audience – when there is another retro wave and suddenly people dig you up and you start selling records again?
I believe that, in that case, they should remember us the way we were. The risk is too big. No, I don’t want this. It’s also a skill to know when your time is over.

I like that. A lot of people miss the perfect time to retire and keep on doing mediocre work. For example, I saw one of the last Motörhead concerts, and it was just sad, because the guy just wasn’t himself anymore.
I don’t need that, standing on stage as a wreck.

You said that you became relatively big as a band. Of course we are talking about an underground scene, but still – you attained a good status within this realm. Can you explain why you made it? Are there certain steps that you can attribute to becoming more successful?
What worked for us was that we remained authentic. We never sold ourselves out. At no point did we decide to do everything that was offered to us. On the contrary, we carefully selected our options and, even if things didn’t work out, it was a good thing because we didn’t oversaturate the people with our presence. This is very important – that we can look ourselves in the mirror and say we did it our way. Also, we were always nice. There are many bands that are not nice and that are difficult to deal with. This was never the case with us. People who worked with us noticed that we were down to earth and sympathetic. I also think that we’re uncomplicated. Of course every musician has his flaws, but I think you could always talk to us, and we would try to be fair and accommodating – on both sides. And we never exploited that and demanded irrational fees just to get half of it in the end. This whole crap – I think this is a secret recipe, to remain true to oneself. For example, I still like to sell our t-shirts for 12 euro, not for 20 or 25. What’s the point of this? I don’t buy a shirt for 25 euro, pay the ticket, and get myself a beer. This doesn’t work. So this is a very important aspect.
This is something that I also do with Sijjin. I insist on doing a demo first, and not start with an EP or an album. I find it very unappealing with bands when they try to take as much as they can. This is not good. When you start small and let it develop from there, that is the best way. That’s how we started with Necros, and this is how we start with Sijjin, and I think this is very important.

Do you think that being goal-oriented and having a focused way of thinking are also important to be successful?
This is very important. It starts in the rehearsal room. I know so many bands that during rehearsal drink two crates of beer, but in the end they do nothing. But when you are ready to work on your stuff, then you need structure. Of course, over-planning is also not the best, because then you focus too much on external things. But a certain structure, and doing what is necessary, are very important. We always had them and worked all the time. We prepared the records well, we prepared the shows well and practiced, because we knew we needed to be able to play the stuff. Also we never played rock star and partied hard before a gig with the attitude that we didn’t give a damn. That’s not good. I think this is what got us out of the very small clubs quite quickly.
But actually, I don’t prefer that kind of level of success. Recently I watched DROWNED and COFFINS at Urban Spree, and it was amazing. This kind of setting – that’s what I want to return to with Sijjin: playing small club shows that have this kind of atmosphere. But for this you also need to work; otherwise you will continue to play in youth clubs.

Well, you have made yourself a name and reached a certain status, and also you have created a good network.
That’s right. It is a big advantage. I know a lot of good people who always supported us. This is a big plus, I have to say. Still, these people are all very honest and, if the music weren’t good, they would say that. They would write a review that would not be flattering. One of the worst examples was when we played one of our first bigger shows at Rock Hard Festival. I think this is the worst concert that I can remember. It was really bad. At the time I just wasn’t ready for this kind of stage. Up until now we didn’t care and would just play our asses off. But back then I just thought “Where is my small club, where is the sweat?“
Still, this is one of the few negative examples. You learn from this; you tell yourself, “Holy shit,“ and then you know how it works. For certain kinds of stages you need to work differently. You need to be more detached. The following years we were able to be like that.

Part two of the interview deals with the spirituality aspect. We talked about the development of this topic in the Necros Christos albums, the sources of occultism in early christian literature and finally about the aspects of good and evil on a very personal level. Read the full interview alongside with fullpage portrait photographs in the print issue of DEPICTED. Get your copy here: